Born in Brindisi in 1954 he has his debut as a scenographer in the Seventies. He gets interesting in painting, fascinated by Impressionism and romantic Realism. His early works are inspired by expressions of social denunciation, such as the institutional figures represented by chickens, or locomotives, symbols of the relationship between speed and the time that goes by.

He gets to know important artists such as Bay, Alinari, Giovan Francesco Gonzaga, Possenti, Treccani, Combas, Pignatelli and Longaretti. His work are exhibited in Stuttgart, Innsbruck, Luxembourg, Arles, Budapest and Helsinki as well as Italy. His works are inspired by the cities he visits. Today the metropolis is his favorite subject, brilliantly exalted by monochromic technique.

He is in the historical archives of the Roman Quadriennale and in the Catalogue of Modern Art edited by Giorgio Mondadori (Milan) classified as AC: Alto Iinteresse Critico (High interest of Critique). He made pieces for the Venetian biennale in 2007 and 2011.

He is part of the Arcani Movement with which he exhibits his work in Italy and in the US. In November 2012 his artworks dedicated to human rights are shown in the UN gallery. And so political themes find their way back into Guadalupi’s paintings: Contrasts between riches and ever-changing realities, young people’s dreams and care for children.

One of his works is on permanent show in the Giuseppe Sciortino museum in Monreale (Palermo), whilst another is in the National Museum of Lviv, Ukraine. 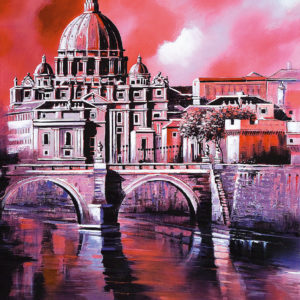 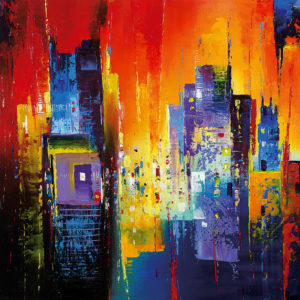 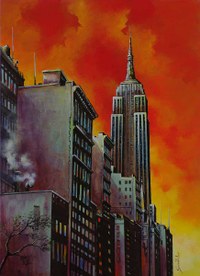 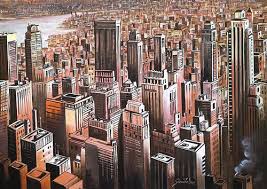 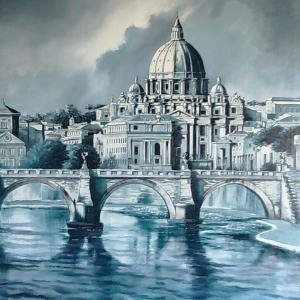